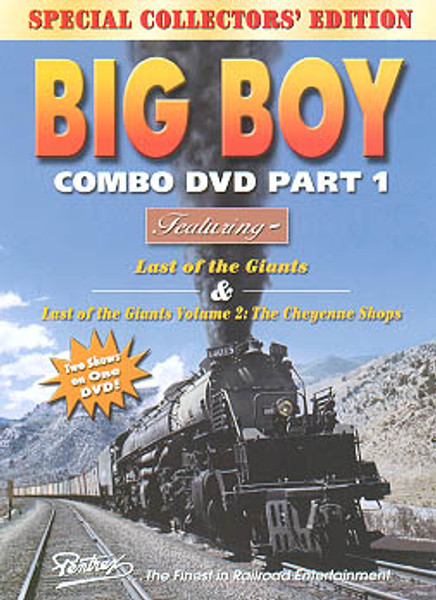 Measuring 132 feet long and weighing one and a quarter million pounds, the Union Pacific Big Boys were the largest, heaviest, most powerful steam locomotives of their type. These giants could pull a five and a half mile long train on level track. Although only 25 Big Boys were ever built, over the 18 years those few engines ran up nearly 26 million miles hauling billions of tons of freight. In Pentrex's Big Boy Combo Part 1, you'll see two fantastic shows presenting the Big Boys in all their glory!

Last of the Giants (23 Minutes)
Union Pacific paid tribute to its Big Boys in a publicity film that has become a sought-out collector's item for rail enthusiasts worldwide. You'll see the evolution of UP steam power from 4-6-0s to the development of the articulated locomotive. Then you'll meet the Big Boys and watch as they are serviced, rebuilt, and run. Trackside and cab shots feature these mighty 4-8-8-4s pulling long freights over Wyoming's Sherman Hill during their last years in service. This classic film is one you'll enjoy watching again and again.

Last of the Giants Volume 2: The Cheyenne Shops (1 Hour)
Cheyenne was a bustling hub for UP steam in the 1950s. It's where the Big Boys were based during their last years of operation powering freights over Sherman Hill to Laramie. In Volume 2, you'll go on a tour of the coal chute and servicing areas, take a spin on the turntable that served the 48-stall roundhouse, and visit the backshop where the Big Boys were rebuilt. You'll hear the stories of the men who once worked on these famous locomotives and will learn about the operational layout and design of the Cheyenne yards as they were in the late 1950s. The footage used in this production was shot by UP cameramen over a 3 year period, with updated material added by Pentrex in 1993. It's an unforgettable visit!

The Beauty and The Beast 1000-piece Puzzle by SunsOut