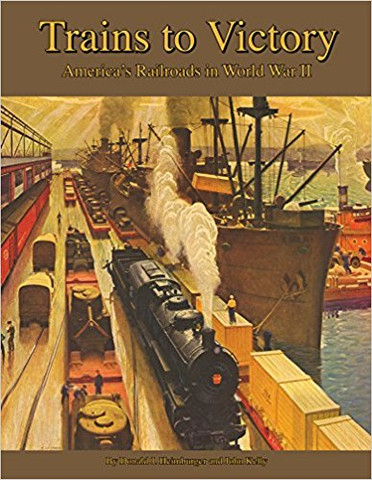 Trains to Victory tells the dramatic story of the years 1941-1945 when U.S. railroads, using fewer cars and locomotives than in WWI, moved more tonnage and more passengers than ever before. This 380-page hardbound book features 542 photographs, an additional 285 illustrations, a four-color laminated dust jacket and a complete listing of U.S. military camps, posts and bases as of August 1, 1941. The book discusses the implications of the war on the railroads, embarkation of troops and materials, how the Military Railway Service joined the fight and what was happening on U.S railroads during the war. It also addresses new railroad cars and locomotives built for the war, military camp railroads, how Alaska’s railroads played a part in the conflict, how women helped the war effort, and what was happening in foreign theaters. It describes how railroads aided in the return of wounded troops and equipment, and the atmosphere on the railroads immediately after the war. Scale drawings of war-emergency box cars are also included, as are troop train car plans.

Trains to Victory covers such topics as the huge Chicago & North-Western Proviso Yards during wartime, personal glimpses of the war from a number of railroaders and intriguing aspects of the war from the Army Engineers, Association of American Railroads and the War Department. Wartime products of locomotive and railroad car manufacturers such as Baldwin, Alco, Davenport, Lima, Whitcomb, Budd, Electro-Motive, H.K. Porter, Pullman, American Car & Foundry and the St. Louis Car Company are documented throughout the volume. Hardbound, 8½ x11", 380 pages, 825 photos and illustrations, 32-page all-color photo section, 13 chapters, extensive historical military/railroad documentation.