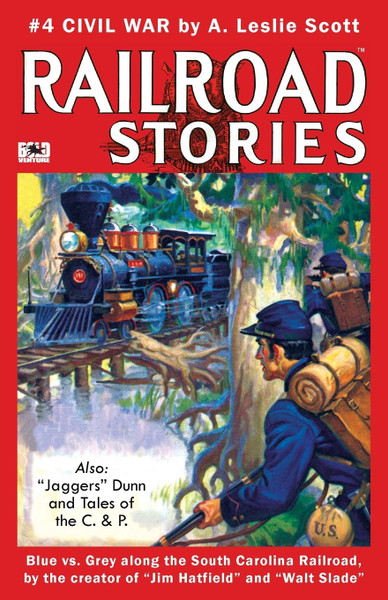 Blue vs. Grey along the South Carolina Railroad, by the creator of "Jim Hatfield" and "Walt Slade"

Rails across the Confederacy

Fact-based fiction by the creator of "Jim Hatfield" and "Walt Slade"!

Tales of Jaggers Dunn and the C. & P.

General manager James G. Dunn and his scrappy pals confront problems on the C. & P. rail line with a smile. Flood, fire, thieves, and abrasive personalities - when "Jaggers" Dunn is on the job, nothing will prevent the C. & P. from maintaining a schedule!

A. Leslie Scott (1893-1974) was a prolific author of westerns and railroad tales. He learned on the job, as a brakeman, largely in the American Midwest. Scott's stories are populated with colorful characters drawn from his life on the rails, and packed with plenty of thrills and adventure.

All books sent USPS media rate unless ordered with other items.